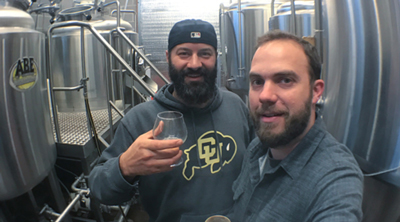 Over the years, beer and brewing brought me many friends, but also some family. Jason was family.

Last November 8th, I got the very unfortunate news that he had passed away on an accident hiking Maroon Bells. He was doing something that he loved.

In a blink of an eye I started to have all this flashbacks of the moments we shared together. All the beer we brewed, all the beers we drank, all the friends we met over the years. A mix of incredible joy and devastating sadness.

I remember getting at @denverbeerco at Platte street and listening to @soundgarden already playin’ on the Stereo. Like a good friend waiting for you to have great moments, he specifically chose that music to make sure he was doing everything he could. We were about to brew BAD MOTORFINGER and that was the day when I first met him personally.

I remember, over many things he taught me, what was a “Hot Scotchy” (or Scotchie?). -“Every time that there’s a new brewer or new equipment in the brewery, we’re supposed to drink a shot of first wort blended with Scotch in order to bring good luck.“ And that was what we did every time we brewed together, only sometimes switching from whisky to cachaça (or sake…) .

I remember when he messed up AM x PM time and I was left to sleep in the car in Platte St. after flying from Brazil to Denver and driving from the airport. On the next day, he was so ashamed and worried… I really didn’t care but it was fun messing with him pretending that I did.   🐨👹

I remember when we camped at his trailer parked at CANWORKS parking lot during #craftbrewersconference week, so we wouldn’t drink and drive all the way back to his house in Longmont.

I remember waking up with his phone call on a random Monday morning and he telling me we won a medal in @usopenbeerchampionship with BAD MOTORFINGER’s version we brewed in Platte St.

I remember when I first set up for him to come to Brazil to give a conference talk @festivalficc ! How happy he was, and eager to learn from a new culture!

I remember how he made friends with everyone.

I remember when he finally showed me @cerveceriacolorado and had me tryin’ every single beer. Patiently explaining each one of them.

I Remember when we recorded a podcast episode in his barn, listening to @neilyoungarchives (as I am now) sharing old stories and beer experiences.

I remember when he came to Brazil again. My mom had just passed away. When we met, he gave me a big hug. He really cared.

I remember that he actually hug me twice, a second one in the name of @scramin.

I remember when we walked in @rheinhausdenver and coincidentally met the Kody’s @coloradomalting having classic lagers. We sat at their table and just talked stories ‘till getting kicked out of the salon into a Denver’s “freezing finest” night. I remember how he started throwing snow balls at strangers, and how the strangers got along and started throwing snow balls back at us.

I remember bringing him Amburana barks from Brazil and brewing a collab. I remember having the honor to be photographed by @brewtographyproject. I remember how it felt. I’ll never be able to expressed my GRATITUDE for those shots, Dustin.

I remember Jason, @scottjanishdotcom and I walking around Denver at night. Looking for a place to eat. Settling at @mybrothersbar, an old school (Denver’s oldest bar) burger and beer joint.

I remember when we first brewed OSAKA in Brazil. He brought sake yeast with him.

I remember going to Bibica’s @silviosdn place on a Sunday for a special lunch he cooked for us.

I remember when he invited me to #greacraftbrewing party. Right after, we went for a Mexican Brewers Party. He loved everyone and everybody felt the same way about him.

I remember when he introduced me to Richard Simpson at the Brewers Welcome’s Dinner Party in Denver. I was so amazed! We always used @simpsonsmalt malts for our dark richer beers like BAD MOTORFINGER, and we kept talking about how much we loved those malts, every single time!

I remember when he took me to @codacoffee facility so we could discuss the extraction profile for the espresso we infused in Bad Motorfinger.

I remember meeting up at @cellarwestartisanales for a beer. That day was winding insanely outside, was fun just to run from the car to the inside of the brewery.

I remember when we brewed a collab in Arvada. We walked around stoping by the breweries to talk to the brewers and drink their beers.

I remember watching the #worldbeercup online and cheering real time when he got medals.

I remember when I first introduced myself to brewers in COLORADO through @brewersassoc online forum. He was one of the firsts to respond to my invitation for brewing a collab.

I remember when Jason introduced me to Francis Heitz, a French hop grower that latter on would make incredible projects involving French hops possible for Koala San Brew.

I remember when we set up Otto’s drum set in his room.

I remember discussing over a few beers on what to brew for a Collab on his next visit to Brazil. We then, had the idea to brew his original recipe for DEATH BY COCONUT. So we did DEATH IN PARADISE

I remember when he first showed me CANWORKS facility. They we’re installing the new massive Italian Canning Line. I remember seeing the schematics layred on the table. It looked complex.

I remember years later when I got back and saw it working. He showed me every single detail of the whole line. It was so amazing to see that line raging beer cans out.

I remember brewing our first collab with @omfbrewing and asking @scramin if he knew Jason. I had just arrived in Denver. At the end of the brewing day, we were all drinking beer and I was introducing the locals to themselves. I remember how happy we all were and I’ll be forever grateful to BEER for bringing us (humans) those moments of joy and love.

I remember when we held an online worldwide brewers conference during this years lockdown, how he participated and added a lot to the talk.

I remember the last time we spoke. We actually texted. We were supposed to call each other to catch up. That was one week before his accident. I was about to hail him on the latest medals at GABF with the Amburana beers. We never spoke after that.

Jason, bro… Your beers, your happiness and your kindness will live on forever. You have changed the lives of everyone who crossed your path, man.  Rest In Peace and brew some good beer wherever you are!